Having a young toddler like Lulu, we have been (very) cautious with small things including coins. Although we keep telling her not to put things other than food in her mouth, sometimes Lulu still puts a random thing into her mouth out of curiosity. However, since she is a BLW baby, she is more aware now which one is food and which one isn't. If she put something other than food, she usually will spit it out or spit and give it to Mama (Ewww! haha..).

Yesterday Lulu was having fun exploring coins. She learned that coins could come in different shapes, size, and materials. This activity made me nervous and super cautious. But then I thought that as soon as she understands about coins, she will start to realize that it isn't meant to be chew. Fingers crossed!

Today, I plan to introduce her to the concept of saving in the most simple way - putting coins into a piggy bank. Actually, this activity is not new to her. I introduced Lulu to some activities to stimulate her eye and hands coordination, like inserting paper coins into a piggy bank or inserting straws into a cup. When I put a piggy bank (well it's not that piggy, as it is in a ball shape), she was so excited to begin the activity. Posting activity is one of the activities that she really enjoy. She develops patience and eager to finish the task.

One, two, three coins have been inserted. Lulu inserted more and more coins into the coin bank until no more coins left. At some points, she had difficulties in inserting the coin because she held the coin wrong. I let her solved it by herself, and it turned out that she could overcome the problem.

"Well done, baby girl! So, we will save money on this coin bank. The next time you have a coin, you can put it here."

Later in the afternoon, Papa came home with a surprise for Lulu. He brought a piggy bank! This time, it looks like a real pig. As soon as Papa show her the piggy bank, she shouted, "Paaa pig!" (Peppa Pig) Hahaha... She has an association that pig is Peppa, her favorite cartoon character. After getting the piggy bank, Papa placed a jar of coins next to Lulu. She instantly knew what to do. Slowly but sure, she picked up each coin and inserted it into the piggy bank. 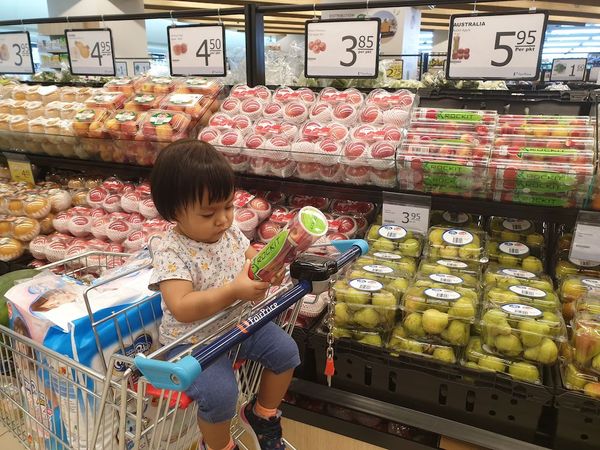 Today we went to a supermarket to buy some groceries. Introducing financial literacy to her, today we plan to introduce Lulu to the concept of market, where people buying and

Introducing financial literacy to Alula, today we play with coins! Alula has never been playing with coins before. She was too small to understand what can go into her mouth