What a fun way to explore a star shape we had yesterday. Today, Mama is trying her luck to introduce a square to Lulu. Although she hasn't been able to say the word square, I hope that this activity will expose her more to the square.

We did some activities involving squares today.

The first game is to put the magnetic square onto her toys trolley. Lulu was thrilled knowing that the squares can apparently stick firmly to the iron trolley. Well, I guess it's not really new to her as she used to play along with my fridge magnets every time she follows me to the kitchen. Whenever she succeed to stick the square, I will count it for her. "One square", "two squares", and so on.

Game 2: Put inside the square

Just like we did with the star, Mama made a (again, wonky) square on the floor using a colourful washi tape. While making the square, I explained to Alula what was I going to make, and she enthusiastically paid attention to what I was doing. Once the square ready, we started to play.

In this game, Lulu made a team with Papa. The rule is she should put as much toys (that are scattered on the floor) as she can into the square. This time she did the game more enthusiastically. Maybe she was thrilled that Papa was playing along.

Lesson from this game:

While exploring what kind of games that I can do to introduce a square to Lulu, I remember her favourite toy: a puppy laptop. The laptop has some shape buttons on it: a square, a triangle, a heart shape, a circle and a star. When we press a button, the puppy will make sound, telling what shape is that. On top of that, there will be some songs too.

As soon as I took this toy out of her trolley she gave me a big grin. Once I opened the laptop she immediately shouted "star!" while pointing to the star shape. "Ok Lulu, you already know star. Can you tell me what shape is this?", I pointed to the square. She didn't answer. Maybe she didn't know how to say it yet. Then I changed the question, "Can you press the square?". She looked at me for a while and pressed the square button with her left index finger. Yeay!

Lulu has been playing and her toys are scattered all over the room. Sigh! But, suddenly Mama got an idea. I picked all of her toys that has a square shape and laid them on the mat: books and magnetic shapes.

At first, she seemed not interested to what I was doing, until I said "Look, Mama has a lot of squares!". She approached me and started to play with the squares. While she was playing, I told her what object that she picked up, something like "oh, you take a red magnetic square", "Do you like that square book?", "What's on this square book? Is it a T? Let's read what's inside."

Lesson from this game:

So, after all the games, can Alula finally understand what a square is? Hmm.. to be honest Mama is not sure. When I tried to ask Lulu what's the shape name, she answered "Taaa!" (star). Hahaha..

Ok, Lulu, let's keep playing with the squares for some time. And I think, I need to find a catchy song about square so that we can sing it together. 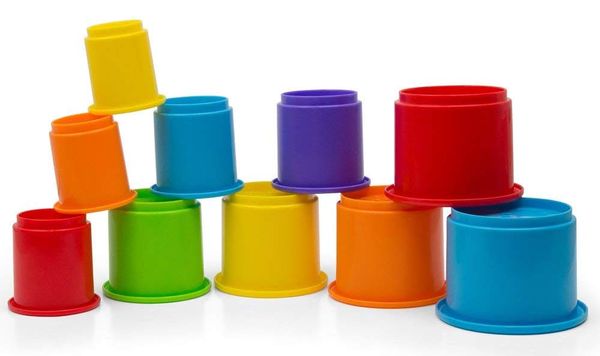 Mamas attempt to develop Alula's early math skill continues. After two days attempts of introducing shapes, today we did something different. Our activities today is about Alula's colourful stacking cups.

Alula has been learning about shapes through books and play. Occasionally, I have been telling Alula about shapes we found anywhere by pointing it. As she couldn't speak yet. I'm not sure if she gets it. Until recently, she would shout, "Taaa!" (star) every